When we look at a modern radio like the one above, we don’t see much. We might recognise that this is a dual-band radio, since it has two frequencies on the display – 145.410 and 444.400. These frequencies are in MHz (MegaHertz) – but there’s nothing on the display to tell you that. The first is on the VHF/2 metre band, and the second is on the UHF/70 cm band. If this is starting to sound like jibberish to you… keep reading and we’ll clear it up.

Understanding the concepts of band and bandwidth are fundamental to learning about radio and communications. We cover what you need to know about the topic to pass your ham radio test in our Canadian amateur license class in sections 4 and 10. But a more fundamental explanation is in order.

To better explain it, let’s forget about amateur radio for a minute and consider something you already understand – AM and FM radio.

If we look at a modern radio display, we’ll see something similar – say, 99.1 FM.

This is how radio dials used to look. It gives us a lot more information. It’s like the difference between blindly following GPS instructions and looking at a detailed map.

This dial clearly shows that the radio can handle two bands – AM and FM.

The two bands (AM and FM) are reserved for commercial radio. The radio stations are each assigned a frequency for their area within that band, and they are not allowed on any other frequency. Most radios will only receive signals within these two bands. To summarise:

If we want to get into more detail… AM means Amplitude Modulation, and FM means Frequency modulation. AM and FM are two different ways of transforming audio – or sound – into radio waves – or modulation techniques. There are all kinds of modulation techniques out there for audio and for other things – like turning TV signals into airwaves, and changing the bits of data in your computer into signals that can be carried over your DSL or cable modem – that’s short for modulator (for turning the bits into radio waves) and  demodulator (for converting the radio waves back into computer bits).

But back to radio.

Amateur radio operators have separate frequency bands allocated for amateur radio use, and their radios are designed to both receive and transmit on those frequencies.

We’re going to use a tiny little device that sells for about $40 that allows you to listen to and see the radio waves on commercial FM radio and many other bands. 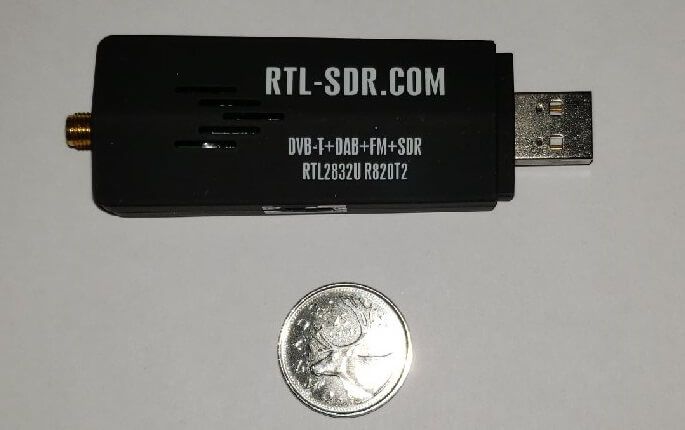 This little USB dongle is a miracle of modern radio and computer technology. It sells for around $30. It’s an extremely powerful radio receiver device, and when paired with some PC software, it allows you to listen to and see all kinds of radio signals.

We recommend as part of a base kit for any radio amateur. 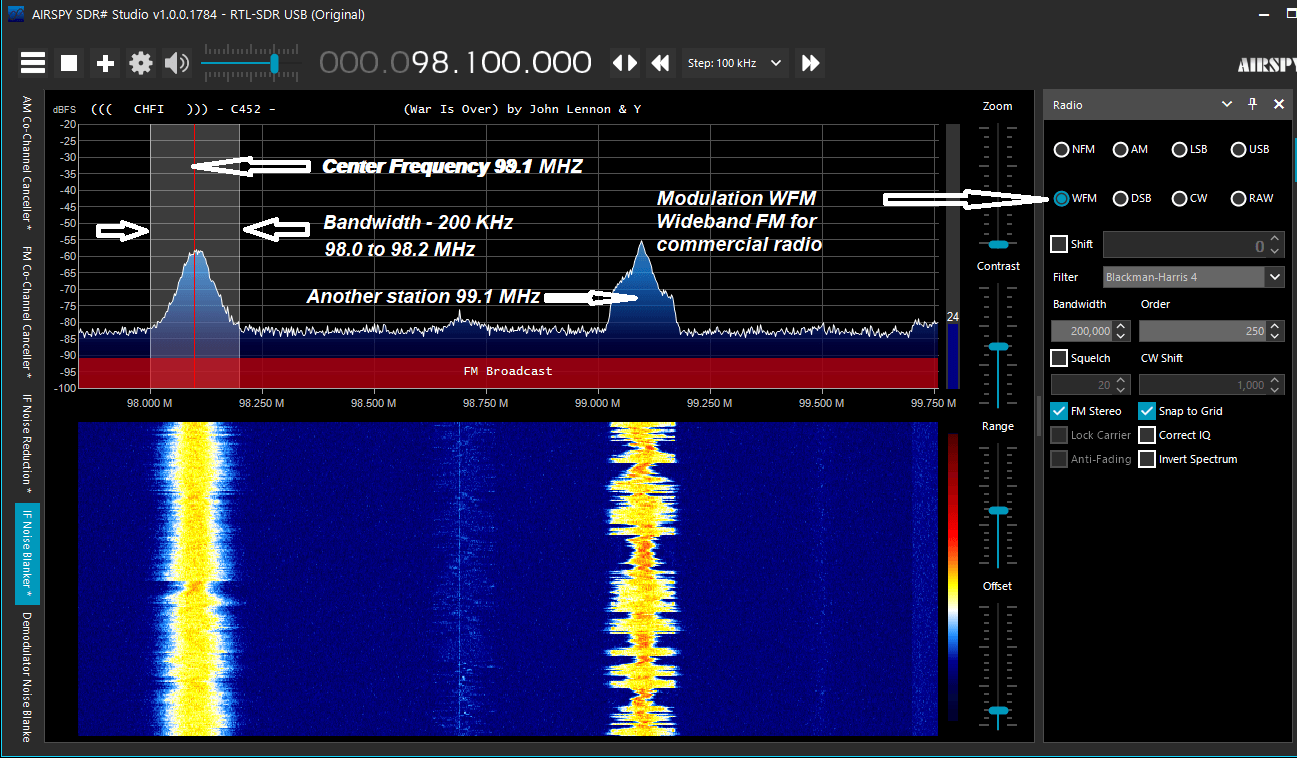 Let’s look at what the display shows us.

The software recognises that we are in the commercial FM Broadcast band, and it shows us that in that red stripe that goes across the middle of the screen.

We mentioned earlier that FM means frequency modulation, and the modulation is the method used  to convert sound waves to radio waves. If we look up on the right, we see buttons for the different modulation techniques. You’ll notice AM  – amplitude modulation – for our AM stations. WFM – wideband FM is for the commercial FM broadcast. At 200 KHz bandwidth, it’s wide compared to the much smaller bandwidth allocated to amateur communication.

Here’s an important consideration: when allocating a centre frequency for a station, we need to ensure that our signal is entirely within the frequency band. Remember when we said the commercial FM band goes from 88 MHz to 108 MHZ. Because the entire broadcast has to stay within the band, the lowest centre frequency allocated is 88.1 MHZ, and the highest is 107.9 MHz

Now let’s move to a frequency band that’s outside of the commercial FM radio band.

The frequency band from 144 MHz to 148 MHz is allocated to amateur radio. Hams refer to it as the 2 meter band, and also as VHF.

Let’s see what the 2 meter Ham band like on the RTL-SDR. 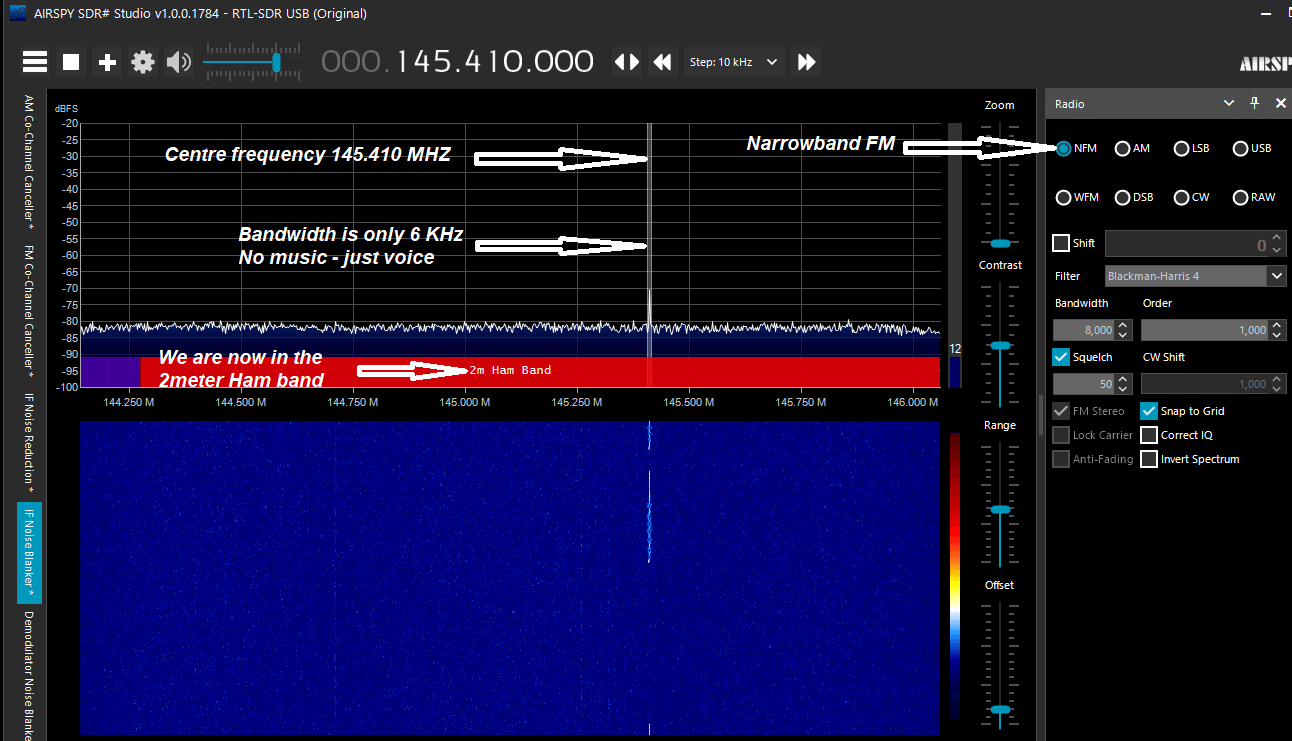 First, the software had identified us as being in the 2 metre amateur radio band, according to the red stripe in the middle of the screen

The bandwidth is much narrower – only 6 KHz, instead of the 200 KHz allocated to commercial FM broadcast. Why? Amateur radio only allows voice in this frequency band. We can’t play music. So we need much less detail, which means  less bandwidth.

To use less bandwidth, we use a different modulation technique – NFM, or narrowband FM. We can see the selection in the upper right hand corner.

If your head doesn’t hurt yet: two more concepts

Radios are built to handle multiple bands, bandwidths and frequencies. You’ve probably seen radios that combine AM, FM and shortwave.

Let’s have another look at our RTL-SDR screen. 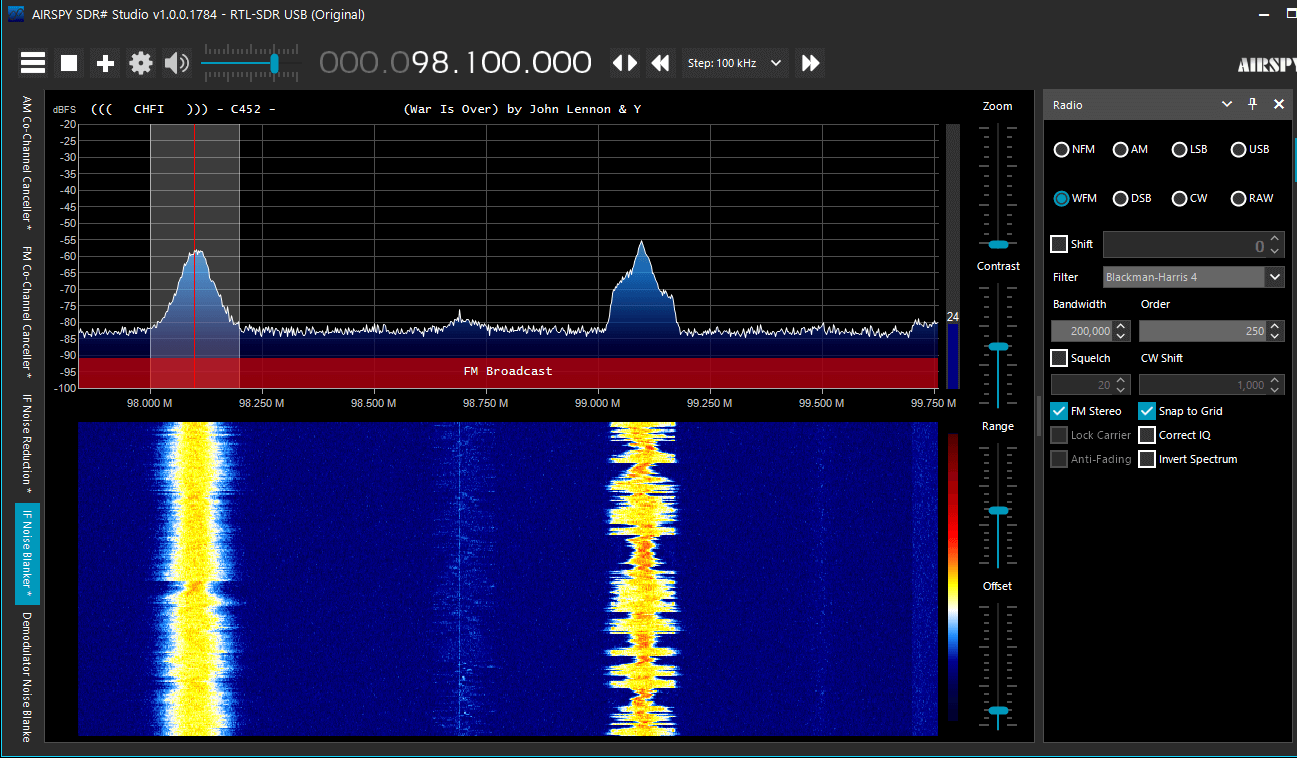 Somehow, the RTL-SDR is able to look at multiple signals simultaneously.

The RTL-SDR uses a chip that was designed to handle terrestrial digital broadcast TV, which requires a whopping 6 MHz of bandwidth per  TV channel.

By sampling and processing the signal millions of times per second, the combination of the RTL-SDR dongle and the power of the computer it’s attached to can analyse all the signals in the bandwith and present them on the screen.

The latest digital radios and software  can process and decode all kinds of thing – including TV signals. They can convert morse code into text, or generate the morse code for you from your text.

And they start on the number three.

For the amateur radio test, there are three you need to remember:

The frequency bands we looked at above  – commercial FM Broadcast and the amateur 2 meter band – both fall in the VHF range.

Because Ham uses FM modulation on both the 2 metre and 70 cm bands, ham operators will refer to both as FM.

HF uses different modulation techniques – AM and some variants.

You will learn more about that if you go through the training.

Industry Canada publishes information on all the frequencies allocated in Canada here.

You can also download this poster – and we mean poster. Take it to your local printshop to get it printed poster-size and laminated. 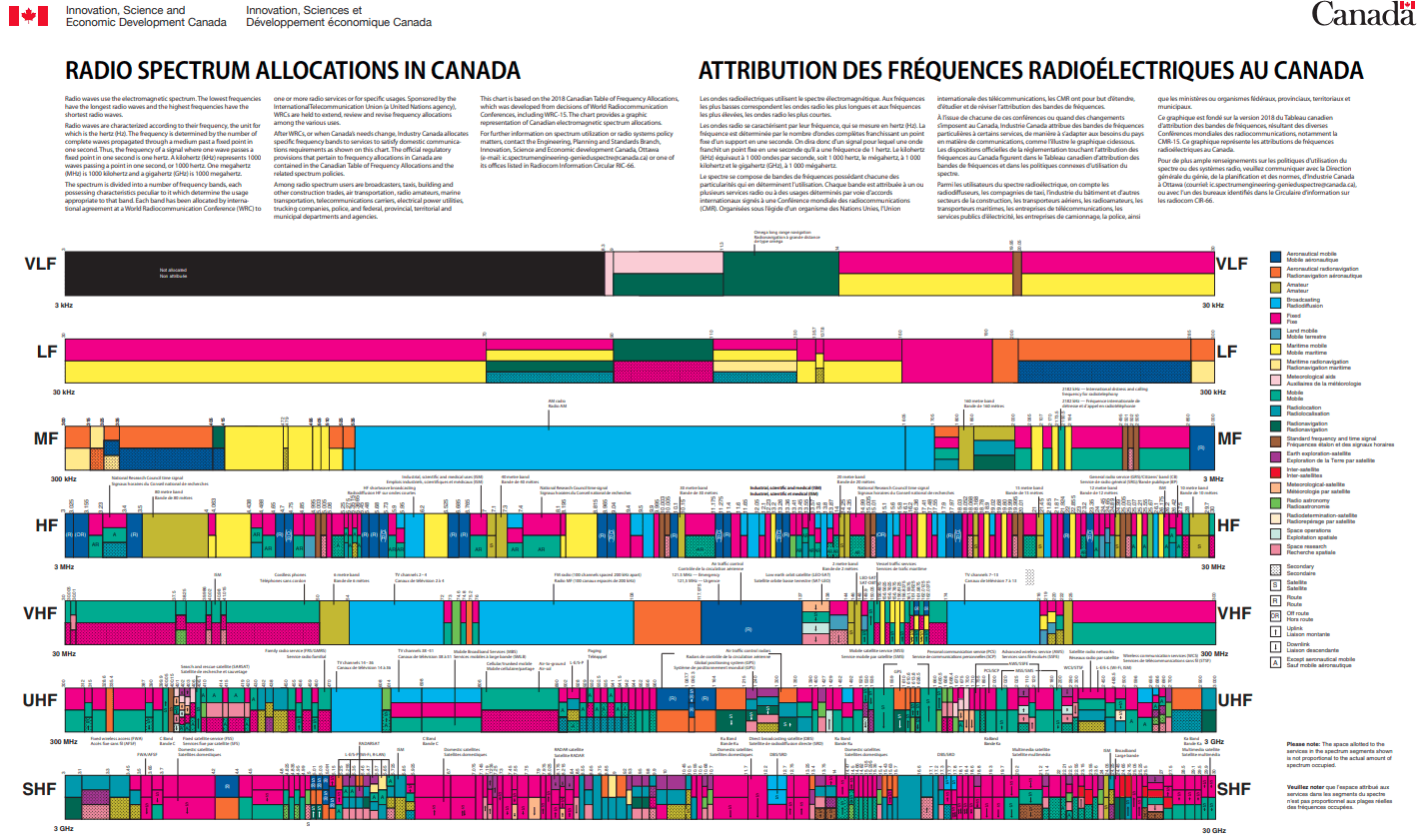 Check out our Canadian Amateur Radio training series at https://www.ylab.ca/radioclass/